“The Return of the Native” by Thomas Hardy : A Study in Dark!

The book is one of my personal favorites. Hardy draws the characters are very lifelike. I myself grow up in a small town and moved to a city. The characters like Venn, Eustacia, Clym, Clym’s mother, Wildeve and Thomasin is very common in everyday life. In different parts of India, the illicit sexual relationships or the girls marrying men to escape from India to settle to an unknown foreign land for better fortune or continuing many love affairs, betrayal become very common trend.

The Return of the Native has a symbolic tone with philosophy that is related with the small world of human fate. Hardy devoted the full novel against the background of Egdon heath. The heath is very significant by its custom and nature. The attitude of the local folk is very ancient and primitive. Egdon has a face on which time makes but a little impression. The secret of nature is personified in the heath. It might have a special significance. The dark-spirit of nature seems to be ready to engulf the whole scenario.

In the preface of The Return of The Native, Hardy describes that Egdon Heath is the general name of a somber-land. It is an ancient countryside place where lived the earliest tribes of the time. Egdon has a face on which time makes but little impression. Nature rules on Egdon in a mysterious way; evening stays here for half an hour, then the sky points a secret life of nature in the moonless long night which follows the dawn that brings the blues heated noon. Hardy personifies the gloomy mysterious Egdon heath and its natural world. From the very first of the novel the night has a special significance. It is the time when Eustacia and Wildeve meet with each other secretly and in another strange night takes their life at Budmouth when they just wanted to flee from Egdon.

Haggard Egdon looks devilish during the winter’s fog, mist and ugly darkness. In this particular season the ice-storm and frozen north wind blows like doom. It has a pale face, suggesting tragic possibilities. Hardy therefore focuses most of his attention on the tragic dimensions of the heath too.

The heath of course has its twilight majesty and summer gaiety. Hardy vividly describes the humming bees, colorful butterflies, lively green grass-hoppers leaping over Clym’s feet. Blue and yellow striped snakes creeping across the vale, and young rabbits are not afraid of Clym’s presence as a furze-cutter. 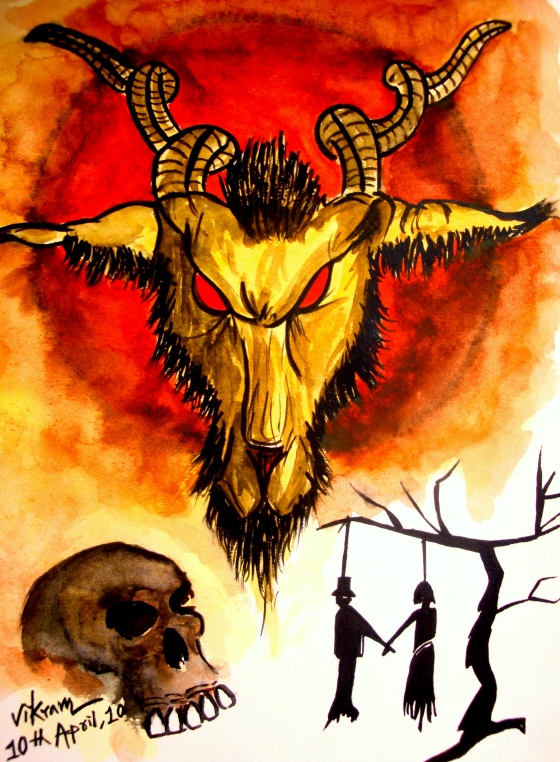 Egdon Heath and its People

Men appear on the heath with Promethean rebelliousness, a grave consequence! Egdon has many faces. People live here have different views about life and of the place. Humanity appears upon the scene, hand in hand with trouble.

Eustacia Vye describes the heath is a place of demons with unbearable air and catastrophic circumstances. Hardy describes her as “the raw material of a divinity” whose “celestial imperiousness, love, wrath, and fervour had proved to be somewhat thrown away on netherward Egdon.” She betrays Wildeve and marries Clym in search of better fortune in the city of pleasure, Paris. She developed a love affair again with Wildeve, her former lover and Thomasin’s husband, when she finds no escape from the heath. Clym becomes blind and is not agree to move in Paris again. At the end she tried to flee with Wildeve in Paris but ironically Egdon heath and its devils (rain, storm, dark night etc) take life.

Clym Yeobright is the “native” to which the book’s title refers. A man of about thirty who gives up a successful business career in Paris wants to educate the heath folk. He marries Eustacia. Unfortunately before starting up his project for a school, he has to face semi-blindness. He is forced to become a furze cutter. He feels, the heath is heaven. He is enjoying the humble occupation of furze-cutting.

Grandfer Cantle, Humphry, Susan, and Christian are the local inhabitant remains as ancient and primitive as the heath itself.

Thomasin looks the heath as an open ground. Her fear for the place is very natural and her dislike is reasonable.

Diggory Venn is the cow-boy of Egdon. Venn gives up being a reddleman to become a dairy farmer. Thomasin marries him and they settle down happily together. “While Hardy abandons these aspects of Venn’s character by the end of the novel, during his ‘reddleman’ phase, Venn lends elements of magical realism and what modern readers would understand to be superheroic elements to the novel.”

Damon Wildeve, the stranger and failed engineer has little love for this humble place. He has a wandering eye and an appetite for women. “A lady killing career.”

Conflict between man and nature is based on the ironical progress of human civilization. Hardy loves to paint the woods, vales, hills, bare uplands, and the vast and gloomy heath with a powerful visual imagination. Actually Hardy’s description has a symbolic overtone with philosophy.

Critics explain that “the true subject of the novel is the background Egdon itself.” “With its deeply flawed heroine and its (for the time) open acknowledgement of illicit sexual relationships, The Return of the Native raised some eyebrows when it first appeared as a serial in Victorian Britain.”

Hardy loves nature like a priest loves religion. He describes everything with his own point of view. He loves to paint the woods, vales, hills, bare uplands, and the vast gloomy heath. “A powerful visual imagination“. Hardy’s description has “a symbolic overtone with philosophy”. In front of the nature, fate, will, pain, and pleasure of men are immaterial. Hardy is not “the worshipper of nature“; Hardy loves nature with his own looking capacity of beauty of the natural-world.