“What is life like in Bangalore, India, for a 26 year old bachelor? We had a catch up with one of our network members, Vikram, to chat about life in his city, whiskey, and the men who style cows… ” Sister Pseudo Consulting, London, UK 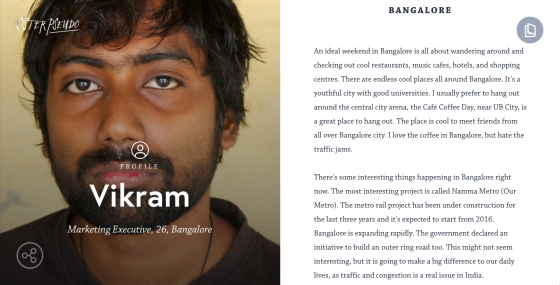 An ideal weekend in Bangalore is all about wandering around and checking out cool restaurants, music cafes, hotels, and shopping centres. There are endless cool places all around Bangalore. It’s a youthful city with good universities. I usually prefer to hang out around the central city arena, the Café Coffee Day, near UB City, is a great place to hang out. The place is cool to meet friends from all over Bangalore city. I love the coffee in Bangalore, but hate the traffic jams.

There’s some interesting things happening in Bangalore right now. The most interesting project is called Namma Metro (Our Metro). The metro rail project has been under construction for the last three years and it’s expected to start from 2016. Bangalore is expanding rapidly. The government declared an initiative to build an outer ring road too. This might not seem interesting, but it is going to make a big difference to our daily lives, as traffic and congestion is a real issue in India.

There are so many interesting characters in the city. There is a vagabond group that has a peculiar profession. I call them ‘Cowmen’. They take a cow, put nice clothes on it, and go door-to-door to collect rice, fruits and money. They are traditional spiritual people. Then there is a guy called Vijay Mallya. Many scandals follows him but people seem to forget everything because he has become one of the richest men in Bangalore by selling beer.

An advertising campaign that I thought was amazing was for a brand called Woodland Shoes. I really liked their tagline;

‘I Never Realized Where I was Walking, Until The Crack Gave Way.’