If you are living in and around Scandinavia, Russia, Nordic Islands, or Alaska, this may be very common to you. But think about the people living in the tropical or sub-tropical regions where the Summer starts a bit early in March or before March. For me, it was a surprise, I found snow covered the entire Östersund city in the month of April.

It was a special visit to my brother in law living in the city of Östersund for work. I traveled all way down from Bangalore toÖstersund. It was night 4:30 am I had my departure flight in Emirates Airlines. I had a nice vegan breakfast in the morning. I reached Dubai around 7:15 am in local time. Changed my flight to Stockholm. During the lunch, I faced a problem in the Emirates. If you are vegetarian, then, please do not forget to select your food preference during flight booking. In lunch, I got a slice of bread, butter, salad and mango mousse and a 350ml bottle of white wine. Seeing the situation and my conversation with the air hostess, the beautiful white girl sitting next to me became sympathetic and she had offered her part of those items to me. Though I refused to had more but I felt she was kind.

When I reached Arlanda Airport it was 11:15 am in local time. It was very confusing like the Snakes and Ladders happened between the local times. Indian Standard Time is 3 hours and 30 minutes ahead of Sweden. 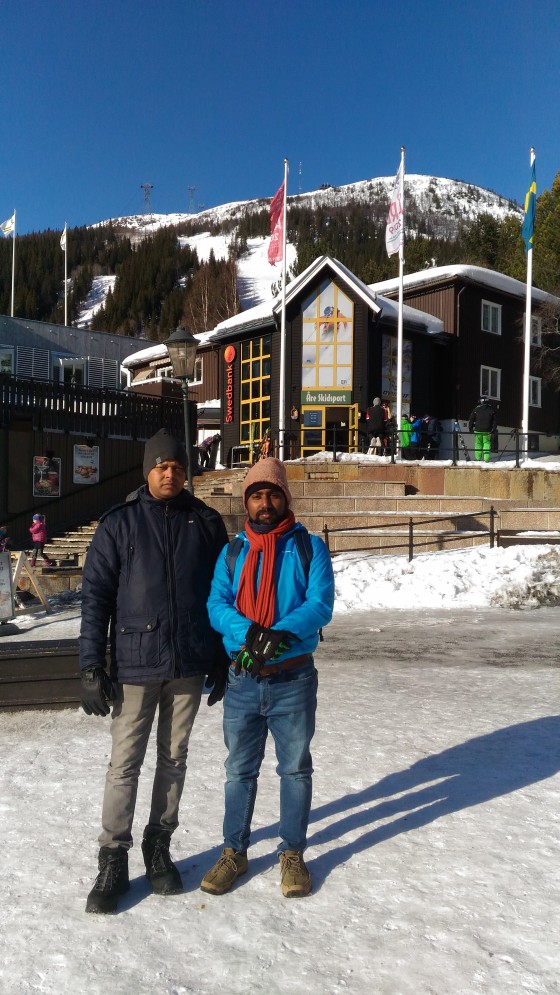 My brother in law and me standing on snow.

I had another flight to catch from Arlanda for the final destination to Östersund. Till Arlanda, I found no major climatic difference. There was cold, but outside there was not much snow. At least at Arlanda Airport, it was not visible. When I board on Scandinavian Airlines it was evening 5:55 pm. outside I felt it was getting colder. I reached around 7:00 pm. in Arlanda. My brother in law was waiting for me at the airport.

Here to my utter surprise, I was literally freezing. Everywhere it was covered up with snow. I was shaking in the cold. While I left Bangalore, it was 18 °C at night and here it was just opposite -19 °C. I got into the car quickly to get rescue myself.